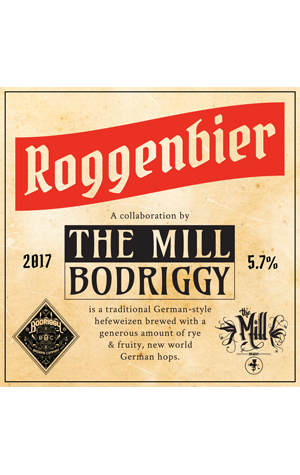 Bodriggy and The Mill are two of the younger brewing operations to call inner Melbourne home. Indeed, the former is still in the process of building its home in a large warehouse in Abbotsford, while the latter only opened its doors in Collingwood for the first time earlier this year. The two got together recently to celebrate their near neighbourly-ness and shared youth in a beer. And they did it with a roggenbier.

"A roggenbier?" you cry. Yes, a roggenbier, a style with origins in Germany that features a hefty proportion of rye malt.

In this case, it was brewed with a grain bill made up of 50 percent rye and 50 percent dark wheat, topped off with some fruity new German hops. According to the team at Bodriggy, it's "very likely the most obscure beer we have made to date", although they warn it's merely a precursor for what's to follow.

There's only 500 litres around (and we took a couple of weeks to get to listing it so that will have been depleted somewhat) so if a spicy, fruity, malty, hefeweizen-y thing is what you're after, move fast!