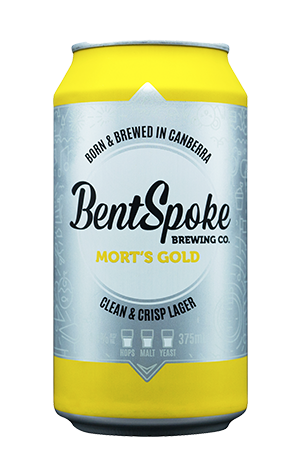 It's not just the 360 degree removable lids that make BentSpoke's cans among the finest in the land. The artwork that may initially look like mere background detail goes a long way towards telling the story of the beer inside. So, if the canary yellow livery and "CLEAN & CRISP LAGER" hadn't already set you on the path to working out what Mort's Gold is intended for, just look a little closer: swimming pools, kites, buckets and spades, water pistols and so on. Yes, it's a beer for kids! Only joshing, it's a beer with beaches, pool parties and summertime in mind.

The third of the brewery's broad lineup to become a permanent canned release, it's a traditionally minded lager named after Mort Street, the location of the original BentSpoke brewpub in Braddon, which in turn is named for Sir Thomas Sutcliffe Mort, a pioneer of the Australian refrigerated meat and ice industries.

While the previous two canned releases – in the limited run Draughter Series – were, in their own ways, pretty bold characters (the hopped to the eyeballs Sprocket and the lively GFG ginger beer), this is very much a laid-back affair. Floral, spicy hops, a broad but restrained bitterness, cracker like malts – little to distract from whatever summertime activity you're engaged in.