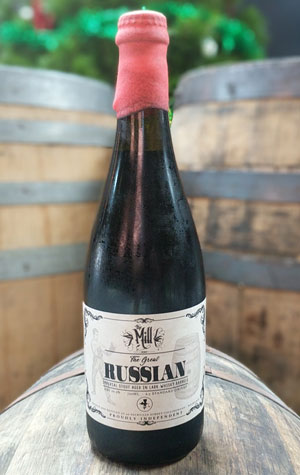 When it came time to create its first bottled beer, The Mill Brewery didn't mess around. At the height of summer, the Collingwood brewery released The Great Russian, a barrel aged stout that spent six months soaking in Lark Distillery whisky barrels.

Since the un-barrelled stout from whence it came weighed in at 8.1 percent ABV and the Lark laden equivalent registers a full 2.2 percent ABV higher, you can be sure the whisky makes itself known. Aromas of peat with a hint of woody vanilla leap from the beer, joined by classic imperial stout aromas of coffee and chocolate.

Flavour wise, we picked up a hit of dark fruit with any sweetness kept in check by a building dryness. The booze hit provides a warming quality to a beer that, though it was been released during the warmer months, has decadent Christmas pudding-esque qualities suggesting it wouldn’t be a bad option to bring along to family festivities on the big day.

It's pouring at the brewery, where you can also pick up one of a very, very, very limited number of wax-sealed bottles