In recent years, Collingwood has been making an ever stronger claim to be considered Melbourne’s leading craft beer suburb. Myriad bars and pubs that call it home are constant champions of local beer, a mantra they often apply to spirits, wine and food too.

To those venues you can add a growing number of breweries – the likes of Stomping Ground, The Craft & Co and, from early 2017, The Mill Brewery – that have brought brewing back to a suburb where it was once an historical hub.

While he may have chosen an already well-established good beer locale when picking a site for The Mill, founder and head brewer Mirek Aldridge had been mulling the concept of opening his own joint long before IPAs were regularly poured through the taps of Smith Street. Indeed, he says the brewery was more than a decade in the making.

Inspiration came while enjoying a Little Creatures Pale Ale with his brother at the brewery’s Fremantle home, inspiration that led him to homebrewing and a rapid progression from kits to all grain brewing.

As his interest in brewing turned into an obsession, Mirek told friends, family and anyone else who would listen about his intention to open a brewery, all while working in the film and TV industry on some of the country’s finest “trashy dramas”.

Finally, towards the end of 2016, he took over an old mechanics garage in Sackville Street, just a couple of minutes’ walk from the junction of Smith and Johnston Streets, and began designing and building the small brewpub himself. Taking its name and logo from the hand-cranked Corona mill that did him proud during his homebrewing days, The Mill first opened its doors in March 2017.

The back of the warehouse is taken up by a 600L brewhouse, while the front bar is divided between shared tables, a vintage arcade machine and a table tennis table. It’s a setup that makes full use of its industrial setting, with rows of skylights and the large roller door allowing light to flood in during daylight hours.

Red gum tables line the walls indoors with the bar itself taking centre stage. The license allows tables and chairs to fill the brewery’s driveway, which gives the bar the feeling of a neighbourhood pub.

On most nights, that driveway plays host to regularly rotating food trucks for anyone looking for an easy excuse to stay put long after knock-off drinks. Indeed, while those after knock-off drinks make up a good part of The Mill’s clientele, it’s also evolved into a bar for locals as well as those on the search for new beers and breweries; as things stand, visiting the brewery is the best option for anyone wanting to try the beers as only a handful of kegs tend to make it outside the four walls where they’re brewed and into Mirek’s favourite neighbourhood bars.

When the Mill first opened its doors, it poured just three beers, some of them, like the pale ale and The Dark Lord Black IPA among the recipes Mirek had been brewing for years at home. Now you can select from a line-up of ten, most one-offs or seasonals and many brewed in collaboration with other local and not-so-local breweries, including Tallboy & Moose, Bodriggy and Hobart’s The Winston.

The close of 2017 saw The Mill released its first bottled beer too, a Lark Distillery barrel aged imperial stout dubbed The Great Russian – the perfect seasonal release for Melbourne summer.

It may have been a decade in the making but, as Collingwood’s craft credentials continue to grow and The Mill finds itself in good company, we’re pretty sure Mirek and those enjoying the fruits of his labours agree it was well worth the wait.

We kicked off our Crafty Crawls series of guides to Australia's best beer venues, grouped by their proximity and easily navigable by foot, bike or public transport, with the 86 tram. Two years on, there's so much more to find, it's now a two-parter.

Hard seltzer has taken the US by storm in the past few years and early examples are starting to appear here. But what is it, why has it exploded Stateside, and will it have the same impact with Aussie drinkers?

Tropicool wasn't always intended as a permanent member of the tap lineup at The Mill but its popularity ensured it grabbed a guernsey soon enough. It stands apart from the other pale ale it sits next to thanks in the main to the choice of hops, with punchy new varieties Idaho 7, Mosaic and El Dorado doing their thing. They do it in such a way it's easy to see why the beer found favour in the current climate, with pineapple and citrus leading the way in a tropically minded drop in which bitterness… Read more
Golden Yellow

One of just a handful of beers you'll always find pouring at The Mill and named after one of owner Mirek Aldridge's mates who held his birthday at the brewery, Jack D-Licious (not his real surname) is a beer designed to tick a couple of boxes: the beer for those new to craft and not wanting to be hit too hard on the palate and those who are simply after something simple to sit on. There's a smidgen of fruitiness from the Amarillo hops, some biscuity malt flavours and a dry more than bitter finish.… Read more
Golden

Another of the core beers always pouring at The Mill, Mostly American does what it says on the tin, delivering a pale ale with mostly American ingredients, with some German hops and English malt along for the ride. With iconic US hop Cascade leading the way, it's more akin to the old school American pales like Sierra Nevada than the fruitier new wave. Earthy, piney and with a pretty hefty bitterness, it's the brewery staff's go to beer.… Read more
Golden

Dark Lord is a name that comes with serious pedigree in the world thanks to the legend that is and that surrounds 3 Floyds' Russian imperial stout of the name. So, if you're going to adopt it for one of your own, there's probably a bit of pressure. The Dark Lord from The Mill is a beer that Mirek Aldridge had been brewing and tweaking at home for years before launching his brewery: a black IPA weighing in at 6.66 percent ABV. Black IPA seems to have become a pretty broad church since the oxymoronic… Read more
Black Collingwood’s The Mill Brewery has been one of the small brewers embracing tinnies as a means of getting their beer into homes, ratcheting up the frequency of their canned releases since COVID-19 hit. Among their autumnal releases is Ménage à trois, a collaboration with neighbours Everyday Coffee that’s made its first appearance in cans after appearing as a keg only release in 2019. Dubbed a Coffee Chocolate Vanilla Porter, it’s brewed with cold brewed Mucho Gusto – a bold espresso blend… Read more
Black Anyone who’s ever played Altered Beast will know it to be a game where a man transforms into a werewolf or dragon to battle underworld monsters. Apparently, if you get far enough you can turn into a bear too. How does it end? Who’s to say, it’s damn near impossible to finish and the game feels more like it was designed to take coins from kids in the 80s rather than being purely about fun. At Collingwood’s The Mill Brewery, they keep their Altered Beast on free play because the crew are not… Read more
Pale Yellow The Mill in Collingwood is one of a handful of mainland breweries to have taken part in the annual Fresh Hop Beer Festival in Launceston, Saint John Craft Beer's celebration of the annual hop harvest. The 2019 festival was their second visit and saw them take an equally hazy approach to the previous year, albeit with a few tweaks – namely, more hops in both whirlpool and at the dry-hopping stage plus more booze. They might not have been the biggest of changes, but clearly they worked as Freshest… Read more
Golden Yellow Collingwood brewpub The Mill is turning two with a party featuring the tapping of two new beers. And they couldn't be much further apart on the beer spectrum, with one a grapefruit XPA and the other a whisky barrel-aged strong ale with habaneros. Grapefruit Paradisi is, obviously, the former, a hazy pale yellow beer featuring both grapefruit and orange zest plus a late addition of grapefruit juice. And, thanks to the pithy character of citrus zest and, according to brewer Mirek, the juice itself,… Read more
Golden Yellow

Hitting taps on March 30 for the 2nd birthday

One of two beers brewed for The Mill's second birthday and one that's been underway since the first, this is a strong ale that spent a few months ageing in keg before spending a further six months in Lark Distillery whisky barrels – the last two of those months with ten habanero chillies for company. The rich malt character of the base beer – originally as a US-inspired strong ale, but with time having softened the impact of the hops and boosted its sweet toffee and biscuit side – provides… Read more
Rich Brown

Launched on March 30 at The Mill's 2nd birthday The Mill Brewery I Can't Believe It's Not Juice

It’s been a long time between packaged releases for The Mill Brewery. Close to a year ago, the Collingwood brewery came out with The Great Russian, a Lark Distillery whisky barrel aged imperial stout with an ABV above ten percent. This time around, the crew at the Mill has gone for a slightly more warm weather appropriate approach by releasing cans of one of the taproom’s top sellers, the New England IPA I Can’t Believe It’s Not Juice. Coming in a label that makes no secret of the fact the… Read more
Golden Yellow

Given the occasional – and occasionally very high profile – stoushes within the beer world around names and trademarks, you couldn't help wonder if there may be some repercussions when The Mill Brewery opened in Collingwood last year when been The Mill craft beer bar had already operating in Brisbane for the past few years. And, indeed, there have been repercussions. Yes, the crew from the latter hooked up with the former's founder and head brewer Mirek to make a beer together. They opted for… Read more
Red 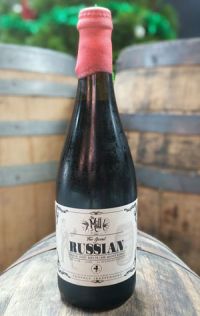 When it came time to create its first bottled beer, The Mill Brewery didn't mess around. At the height of summer, the Collingwood brewery released The Great Russian, a barrel aged stout that spent six months soaking in Lark Distillery whisky barrels. Since the un-barrelled stout from whence it came weighed in at 8.1 percent ABV and the Lark laden equivalent registers a full 2.2 percent ABV higher, you can be sure the whisky makes itself known. Aromas of peat with a hint of woody vanilla leap from… Read more
Black