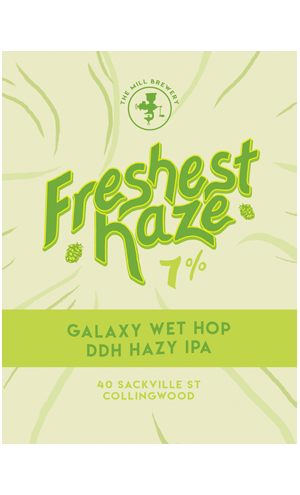 The Mill in Collingwood is one of a handful of mainland breweries to have taken part in the annual Fresh Hop Beer Festival in Launceston, Saint John Craft Beer's celebration of the annual hop harvest. The 2019 festival was their second visit and saw them take an equally hazy approach to the previous year, albeit with a few tweaks – namely, more hops in both whirlpool and at the dry-hopping stage plus more booze.

They might not have been the biggest of changes, but clearly they worked as Freshest Haze v2 was declared winner of the People’s Choice Award at the end of the festival. So, what did people love about the beer? In all likelihood, its hazy display of freshly-plucked Galaxy hops, which deliver an upfront mix of passionfruit, peach and orange augmented by the some earthier and more grassy flavours.

The people of Fresh Hop agree. And, thankfully for the people of Melbourne, he kept a few kegs back at the brewpub.