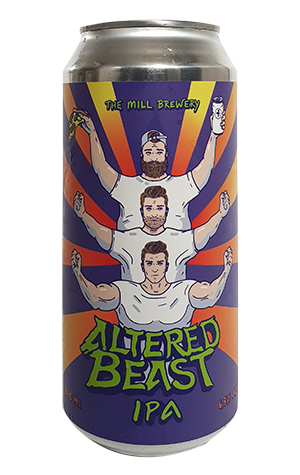 Anyone who’s ever played Altered Beast will know it to be a game where a man transforms into a werewolf or dragon to battle underworld monsters. Apparently, if you get far enough you can turn into a bear too. How does it end? Who’s to say, it’s damn near impossible to finish and the game feels more like it was designed to take coins from kids in the 80s rather than being purely about fun.

At Collingwood’s The Mill Brewery, they keep their Altered Beast on free play because the crew are not themselves monsters and know there’s much fun to be had seeing how bad you are at the game with a beer in hand and that taking out a loan shouldn't be necessary for such revelations.

Like that arcade machine, Altered Beast IPA has been a regular sight at The Mill since it opened and, in November 2019, it became the second of the brewery’s beers to make it into tinnies. Taking inspiration from the game, the can depicts the steady transition from being rather fit and clean shaven to a body shape that will likely follow drinking far too many IPAs. What you’ll find inside the can is a hop combination of Azacca, Ekuanot, Citra, Simcoe and Cascade that transitions from pine and grapefruit towards more tropical notes of melon, lychee and mango before finishing dry and bitter.