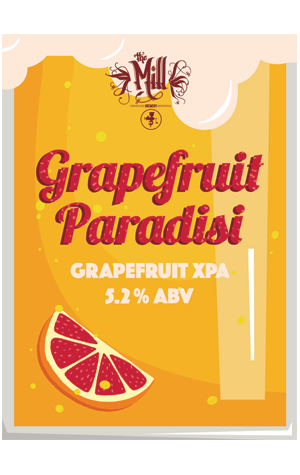 Collingwood brewpub The Mill is turning two with a party featuring the tapping of two new beers. And they couldn't be much further apart on the beer spectrum, with one a grapefruit XPA and the other a whisky barrel-aged strong ale with habaneros.

Grapefruit Paradisi is, obviously, the former, a hazy pale yellow beer featuring both grapefruit and orange zest plus a late addition of grapefruit juice. And, thanks to the pithy character of citrus zest and, according to brewer Mirek, the juice itself, it's a far leaner and drier beast than you might expect, possibly the leanest and driest I've tasted on any visit to The Mill. There's grapefruit flavour aplenty plus a little supporting sweetness in a beer you'd happily return to. Indeed, while few beers make more than one or two appearances on tap there, don't be surprised if this returns, particular when the mercury starts heading up again.

Hitting taps on March 30 for the 2nd birthday