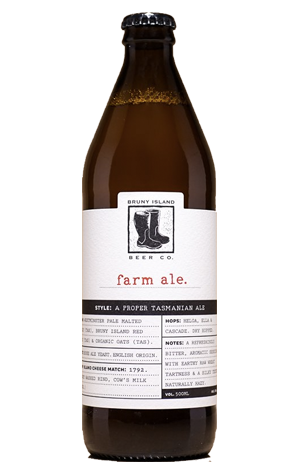 Were someone to pass you a glass of fresh Bruny Island Farm Ale, you'd likely recognise it as the sort of beer many Australian brewers have been doing well in recent years: a fruity, tropical twist on pale English summer ales. After all, it pours a hazy, pale golden colour, has a soft, wheat-enhanced body and offers up rounded aromas and flavours encompassing peach, nectarine, mango and a touch of lemony citrus. Yet the route by which brewer Evan Hunter reached that point is rather circuitous and very different to the way other beers of similar characteristics are brewed: each Farm Ale brew day lasts around 14 hours and often starts at 4am as Evan's use of raw grains requires a two-step mashing process.

As for what goes into the brewery's flagship beer, it's a celebration of all things Tasmanian: barley from farms in the Midlands, oats from Kindred Organics in the North West, red wheat from a local farm on the island then plenty of hops grown not too far away at Bushy Park.