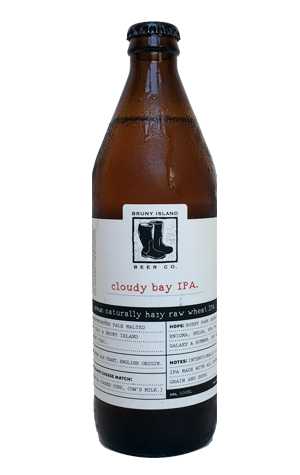 Cloudy Bay was conceived as a tribute to the state's biggest hop grower, the Hop Products Australia operation at Bushy Park. It doffs its cap by featuring six of the proprietary hop varieties developed by the grower (which means the beer will be changing over time given HPA's decision to discontinue some to focus on its most popular crops). While they're all still available, that means you can tuck into a mix of Galaxy, Ella, Enigma, Helga, HPA-035 and Summer added at seven stages in the brewing process.

It pours a hazy (cloudy) gold, with a texture so raw it gives the impression that the hops are still in the beer. We picked up apricot, ripe pineapple, melon and grape aromas with some spice and liquorice in the background. There's plenty of hop flavour and less bitterness than you might expect, with the English house yeast adding another layer of fruitiness to the mix in a beer that, thanks in part to the use of local raw wheat, is rather creamy on the palate too.