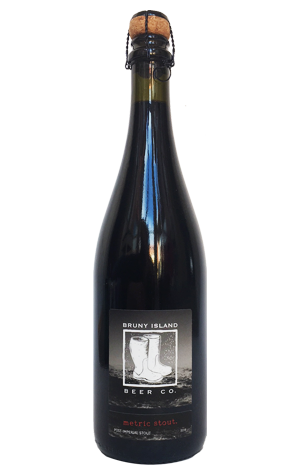 Bruny Island Beer Co seems to be less a brewery focused on a beer for each season than one that switches up its offering entirely as the seasons change in Tassie. Through the warmer months, brewer Evan Hunter focused almost exclusively on brewing various saisons to augment the core range (four different ones, by our reckoning) and, since things have turned rather cooler, it's back to stouts and hearty, malt led affairs.

Sadly, the insane length of time and number of processes that went into creating last year's epic Stoutfast mean that breakfast stout isn't coming back, but the brewery's annual imperial stout is. The Bruny team say it’s the blackest and biggest beer they've ever released and, as it fills your glass a deep black with a thin head you do wonder: how much more black could this be? And the answer is none. None more black.

Metric Stout also brings with it tongue-coating levels of viscosity as chocolate and coffee flavours make their presence known, delivering rich, roasted aromas and flavours, while it also exhibits a lighter, floral side, aided and abetted by locally grown Cascade, Ella and Willamette hops. And, if you leave it to warm, you'll find the beer developing nutty and slightly herbal characteristics too.