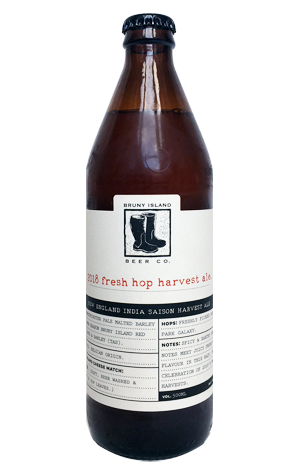 If you've not been to the Fresh Hop Festival in Launceston, firstly, you should. There's scores of festivals around the country now at all times of the year, yet this one still manages to stand out from the crowd as it brings together close to 30 Aussie brewers to launch beers made with wet hops. Secondly, if you do go, you'll find plenty of beers you might not have expected. Think "wet hop beer" and you're likely to imagine something pale in which malt and yeast are there just to let the freshly plucked hops do their thing. Yet, certainly from year two on, the brewers at Fresh Hop have decided that wet hops are good for anything. Sure, you'll find a few IPAs, pales or hoppy lagers, but you'll also find black ales, sours and more.

In 2017, Bruny Island went down a fairly standard route and showcased a double IPA. This time around, perhaps inspired by their well received run of saisons, they plumped for a Belgian style ale. On the hop front, they opted for fresh Galaxy, while the barley, wheat and oats were sourced from around Tassie too. For those who know Galaxy for its passionfruity nature, you're in for a surprise; there's some peachy, faintly tropical hop flavours, but for the most part this is a spicy, earthy Belgian ale, shot through with a dose of honey like malts, that finishes dry as, presumably a result of the peppery yeast working in tandem with the Galaxy's grippy bitterness. Not your everyday hop harvest ale...