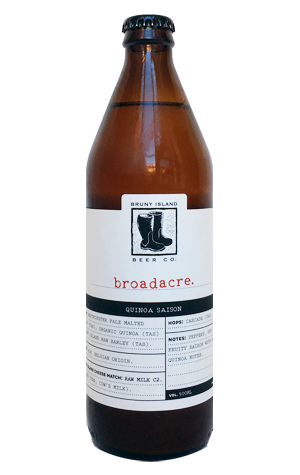 Last time we chatted to someone at Bruny Island Beer Co, they said they were currently on something of a saison tip. And it looks like they weren't kidding, with the fiercely Brettanomyces'd-to-the-hilt Saison D'Entrecasteaux followed by the delightful Brettanomyces'd Beautiful Ugly and now Broadacre, a beer that reins in the overt funk of its predecessors and instead introduces another new ingredient to the young brewery's already diverse palette: organic quinoa.

Given our experience of quinoa saisons is somewhat limited (although we did try BentSpoke's freekeh one a while back), we're not sure at what points it makes itself known. What we do know is that this beer comes with a white head so soft and fluffy it's like looking out of an airplane window from above the clouds. It pours a pale straw colour, which is kind of appropriate as it fires off aromas of straw too, alongside peppery, spicy, wild weed elements. It's the very definition of rustic and makes you wish you were drinking it at the brewery so you could nip next door and grab some accompanying cheese.