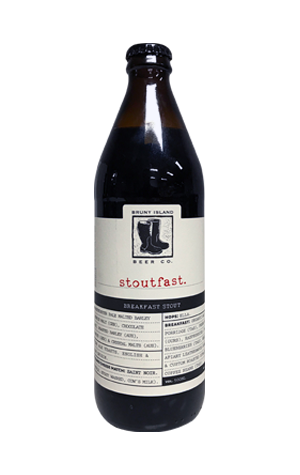 Stoutfast was brewed to herald the arrival of winter and the brewery team termed it everything from a breakfast stout to the beer equivalent of an espresso martini and a breakfast smoothie. As is often brewer Evan Hunter's wont, it was one hell of an involved brew – unsurprising, perhaps, when you consider the ingredient bill includes organic Tasmanian oat porridge, Derwent Valley raspberries and blueberries, Bruny Island Cheese's own fresh cow’s milk whey, Wellington Apiary leatherwood honey and custom-roasted Kenyan coffee beans from Hobart’s Straight Up Coffee and Food.

The brew day was not only a long one but troublesome too, mainly down to the challenges of getting so much fruit through the heat exchanger. But it was well worth the effort, with the beer an absolute delight and one in which all the various elements play a role. There's huge fruit aromas, backed up by hints of coffee with plenty of berries, rich chocolate, sweet malt and, late on, coffee to taste too. The fruit seems to add a tartness that helps keep the sizeable 7.9 percent ABV beer lighter on the palate than it deserves to be too.

Given the challenges involved, Evan says he'll never brew it again. We should start a petition to persuade him otherwise.