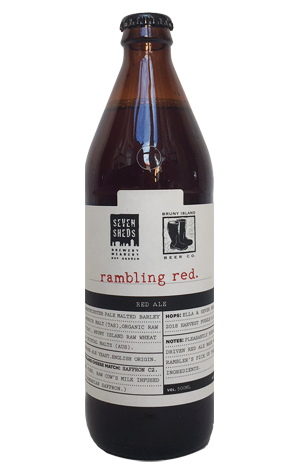 It's been a few years since Evan Hunter worked alongside Willie Simpson at Seven Sheds but, since taking up the reins at Bruny Island Beer Co he's taken plenty of opportunities to collaborate with his old tutor. And they've been at it again for winter 2018, creating the Rambling Red, a red ale with ingredients sourced from across Tasmania – including Willie's homegrown Cascade and Fuggles hops – but with its heart and head just as much in the UK.

It pours a lovely chestnut colour, reminiscent of childhood days playing conkers (OK, so maybe it's put my head in the UK too...) and, while tagged a red ale, presents very much as a hearty, malty ESB. Dense toffee leads the way, supported by a toasted nuttiness, while the Bruny Island house yeast with its English origins adds a rich, fruity twist. It's all underpinned by a faintly spicy, gently drying bitterness and would undoubtedly go well with a Ploughman's Platter, ideally as you collapse in front of the pub fire after a good day's rambling.