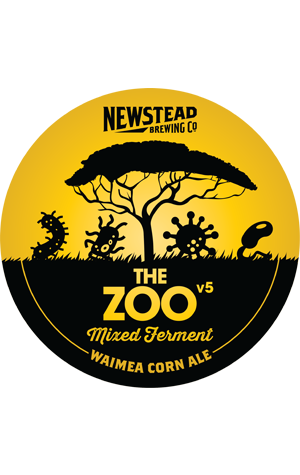 Over the past few months, we'd been a little surprised at the lack of limited release beers from Newstead given how often they tended to fly out of their original Doggett Street home. But, we figured, they've been pretty damn busy: settling into the new Milton facility, launching the core range in cans, overseeing a PhD project (of which more on the latest soon), forging partnerships outside the beer world, and so on. Turns out we just weren't paying close enough attention.

The brewing team – and invited guests – has indeed been continuing to beaver away at draught only, short run beers, including an ongoing series called The Zoo. The name comes from the fact the beers are fermented with a collection of little beasties gathered from the dregs of bottles from the likes of Jester King, Boon, Orval, Timmermans, Lindemans and 3 Fonteinen that were used to create a new mixed culture. Past releases have included a take on their core range Porter; this time around, it's an entirely new creation.

The team brewed a single hop corn ale – ie a beer with 40 percent of the grain bill made up of flaked corn and nothing other than Waimea hops – then popped it inside the Zoo Project barrels for four months. What came out the other end is sizeable (nigh on 8 percent ABV) and, we're told, "a barely controlled, wild fruit bomb: light and bitter."