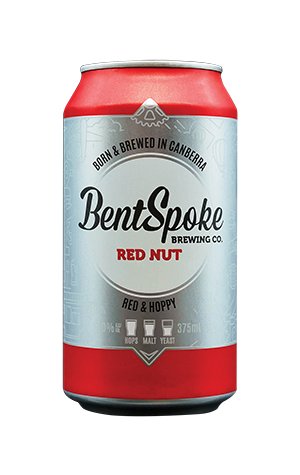 If the falling leaves and changing colours of the landscape (at least in much of the country) weren't indicative enough that we're into a new season, the changing colours of many of the beers coming our way are doing their best to help. While we're not quite into stout season, we appear to be entering darker times, with this autumn seasonal Drifter release (BentSpoke's name for one-off can runs) one of a few red IPAs reaching the Crafty team this week.

Unsurprisingly for an operation that talked of being a brewer of hop forward beers when chatting to us after Crankshaft IPA scored third spot in the GABS Hottest 100, while there's enough specialty malt to create its amber colour and caramel and toffee flavours and aromas, it still leans more towards the hoppier side of the beer spectrum. The beer's haziness is indicative of some serious late hop additions, additions the brewers say deliver on the pine; add in aromas of macerated oranges and plenty of resinous hop flavour without too much in the way of bitterness and you've got Red Nut.

Since first appearing in the world as part of the Drifter series, Red Nut's popularity led to the BentSpoke team deciding it shouldn't be a beer saved just for Autumn and it joined the core range too.

Find it across ACT, VIC & NSW