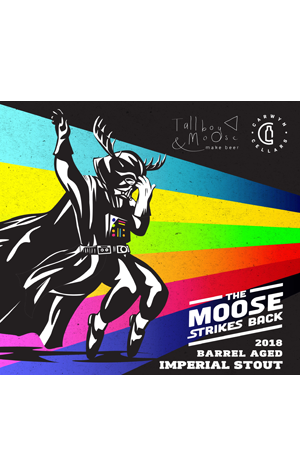 Now comfortably into its second year and its stride, with dozens of beers under its collective belt, Preston brewpub Tallboy & Moose has been exploring the world of barrels. Two of the first fruits of that exploration are out for autumn 2018 and they're rather different beasts.

The Moose Strikes Back is the companion piece to the Darkside Of The Moose imperial stout created in 2017 with the team at Carwyn Cellars. Some of the beer spent eight months in a bourbon barrel before being extracted and released as this bigger, more complex version. It's still chocolaty as hell (well, the yet-to-be-carbonated sample we had was anyway) with plenty of figgy dried fruit in there too. But you now get creamy vanilla and a touch of bourbon as well.

As for Les Soeurs Agricole, it's the first release from their fledgling mixed fermentation barrel program, which some of our Cabal members got to play around with. It started out with a red ale base that underwent an extended period in a single ex-shiraz barrel (one of four sisters) accompanied by Tallboy & Moose's custom blend of bugs gathered from some of the best funky beers in the world. This was then blended with a clean fermented saison. You'll pick up characters familiar from Flanders style red ales: some balsamic like acid characters, fortified sweet malts, cleansing souring acidity and a touch of funk. At just 5 percent ABV and blended with a saison, it's lighter than those beers but nevertheless offering complexity and promise of what's to come from the program.