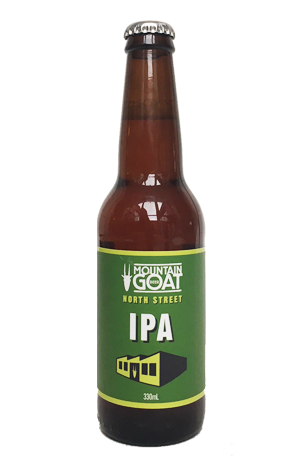 Mountain Goat's history with IPA is long, colourful and laden with silverware. Go back a decade and they had an Organic India Pale Ale as part of a core range of four before a reshuffle saw it ditched when they streamlined to Steam and Hightail. Then came the Rare Breed IPA, the first in the brewery's ongoing limited release series and an instant hit. Since then, there have been IPAs of all shades and sizes, one that was added to their core range and was delicious on tap but less so in pasteurised form out of Asahi's Laverton brewery and, ultimately, retired. And, most recently, banger after banger after banger, including The Zymurgist and Pulped Fiction, both of which won AIBA trophies.

All of which brings us back to North Street, the brewing company's spiritual home, where a North Street Pale Ale became the brewery's core range Pale Ale and now a North Street IPA sees the style return to their core range for a third time. It comes already bearing a gold medal from this year's AIBAs, awarded to a beer that pits a collection of specialty malts against three big hitting hops from the US (Simcoe, Idaho 7 and Mosaic) to create a beer that runs the gamut of appealing hop aromas – pine, pineapple and citrus to the fore – and holds them in place with caramel and rich, biscuity malts. Completing the picture is a bitterness worthy of the style in what is a fine, line and length IPA