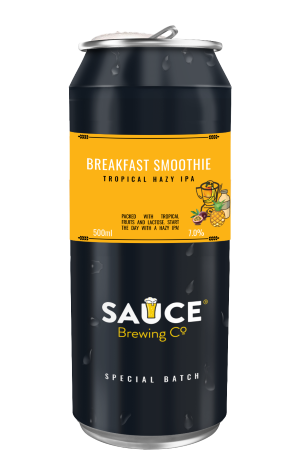 Fruity, fruitier and fruitiest. That seems to be the natural order of things at Sauce as they gradually crank the tropical dial on their New England IPA releases to the right. The latest – following the "straight" Bubble & Squeak NEIPA and the mango-infused iteration Trubble & Squeak – is Breakfast Smoothie, a beer they’ve termed a Tropical Milkshake IPA.

These three beers are, to be fair, all quite different but they’re just so easily lumped together by virtue of them being hazy and fruity as fuck. In the case of Breakfast Smoothie, it does what says on the tin but – and this is the pertinent bit – while still feeling like a beer. After all, it’s a brewery not a juice bar. So, sure, they likened it to a smoothie by loading it with mango, banana, passionfruit and pineapple then lacing it with lactose for a creamy feel. But it’s not especially sweet, having just enough bitterness to keep a fruit riot from breaking out, while the seven percent ABV helps keep things in check too.

Fruity in a more traditional beer sense is the taproom-only Super Saison. This strong Belgian ale comes across as a more intense winter version of the Saucy Saison that tends to appear at the brewery in summertime. It’s one where the yeast is the star of the show, offering up big aromatic elements of banana, orange, pepper and spice on top of a beer with a pleasant sweetness and a gently warming body.