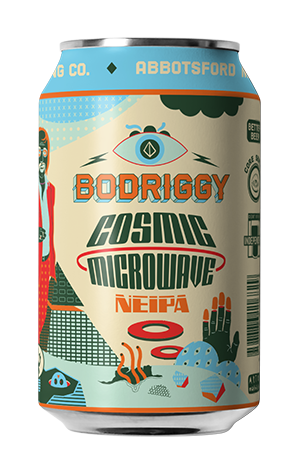 Originally launched in May 2018 during Good Beer Week, Cosmic Microwave returned later in the year as a core range beer, while also being among the first Bodriggy beers brewed at their Abbotsford brewery.

Dressed in a can that invokes images of the history of the universe, its future and a journey beyond reality – not to mention the Wayne Coyne artwork that adorns Flaming Lips releases – the beer is a trip into the haze. Pouring a creamy pale gold with the style's signature soft mouthfeel, Cosmic Microwave isn’t as much of a juice bomb as some NEIPAs to have appeared in the past couple of years, though there's plenty of fruit-forward aromas and flavours lurking within. The most prominent among them is apricot, while you'll pick out some ripe pineapple and, like the IPAs of old, a hint of pine too.