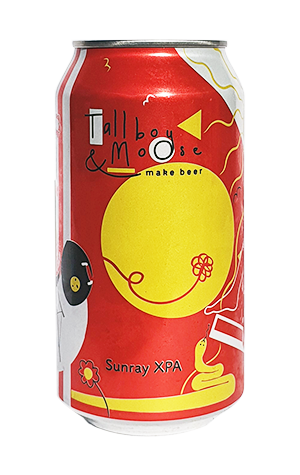 Sunray XPA was the second Tallboy & Moose beer to become a regular fixture on the brewery’s taps so it’s only fitting that it would be one of two cans to make up the brewery’s core range alongside Deadset Lager. It originally appeared as a permanent taproom pour in 2018 as an evolution of the SummaTime XPA debuted in late 2017 and now, for winter 2020, gets its own printed tinnie.

With many variations of the XPA out there, it’s the name Sunray that gives the most away as to what kind of beer the brewers has gone for; this one is a particularly light, pale and bright beer. The hop mix is focused on the new and the tropical with Vic Secret, Motueka and El Dorado delivering a blend of mango, citrus, pine and white peach and a faint yet grippy, resinous bitterness in their wake.