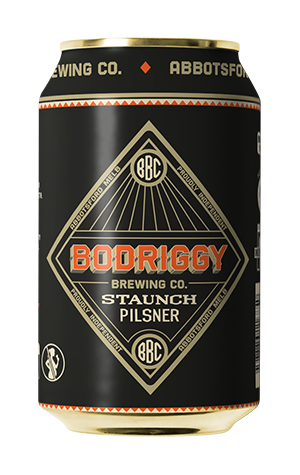 Staunch Pilsner is Bodriggy’s first release in what the Abbotsford brewery is calling its Pub Series; beers where it seems both the recipe and the can artwork is designed to just feel right when they are cracked over the bar at any number of classic old Melbourne watering holes.

Staunch eschews the look of many of Bodriggy’s other tinnies, which can more closely resemble a shoegaze album sleeve than a beer label, and is instead wrapped in mostly black from top to bottom. Even the psychedelic voyager typically found front and centre of the cans has been cast as a shadow just above the brewery’s name. What all that means is that, with its bronzed gold top, it looks very much like the kind of beer you’d enjoy while watching a local band, preferably in Melbourne’s inner north.

And it’s not too dissimilar from the kind of beer you’d be used to enjoying at one of those gigs in years gone by. It’s pale and clean and ticks what is arguably pilsner’s most essential quality of being a beer for refreshment. There’s also some spicy and slightly herbaceous hop flavours and aromas and light biscuit malts that complement the beer’s soft bitterness.