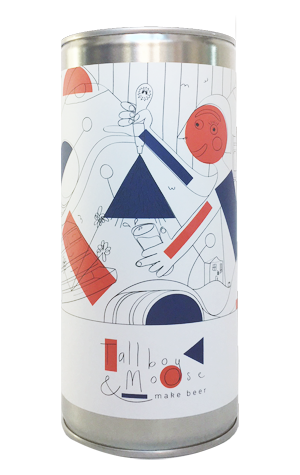 As Melbourne’s weather warms, Preston’s Tallboy and Moose has some new beers ready for the longer days ahead. Among the newest releases is Lucha Lager, brewed in collaboration with Coldstream in the Yarra Valley and inspired by the cervezas of Mexico. The aim was to create a dry, refreshing beer that goes down both quickly and easily.

Much of that light body and dryness comes from a hefty amount of corn in the malt bill and the use of the amylase enzyme, something brewers have long used to make low carb lagers and which many are today using to brew Brut IPAs. It pours a crystal clear light and bright yellow and the clean and light body certainly put it in the refreshing camp. While you could be forgiven for assuming that means it’s a beer with no real hop character, you’d be wrong. New Zealand’s Motueka provides plenty of lime and some zest but there’s also tropical notes in there too.

The second recent release out of Raglan Street is Torch Girl, named after the Statue of Liberty. Gifted to America from the French people in 1886 as a shining reminder of the USA’s dedication to liberty above all else. It’s anybody’s guess as to why the current American administration hasn’t torn it down yet [presumably it's on Kavanaugh's to do list – Editor]. Torch Girl the beer is also a Franco-American project, bringing together the qualities of a classic American pale with those of a saison.

Combining Tallboy’s standard American ale yeast and a saison yeast, it throws out some fruity esters against a darkish malt colour that delivers biscuity characters. The use of French Barbe Rouge hops and American Cascade brings together the former’s strawberry flavours with some citrus and spice from the latter too.