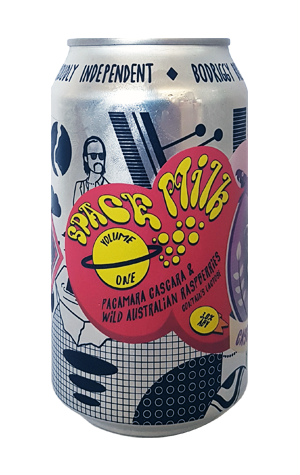 Now that Bodriggy’s brewery is firing on all cylinders we can expect to see a steady release of new and quirky tinnie releases leaving Abbotsford. Among them is a new series going under the Space Milk banner that will feature a rotating range of lactose-laced sour beers.

Volume 1 is a kettle soured wheat ale in which the lactose is joined by cascara (the dried skins of coffee cherries) and wild Australian raspberries. That combination makes for a beer that pours a pinkish-orange hue with a soft and slightly fluffy mouthfeel. It also makes for one that’s reminiscent of consuming a tart raspberry with some sweet ripe cherry in the mix, as well as an example of just how much flavour and character can be crammed into such low ABV beers now so many more ingredients are being welcomed into play.

Or, as the brewers put it, it's "mother's milk, for Martians".