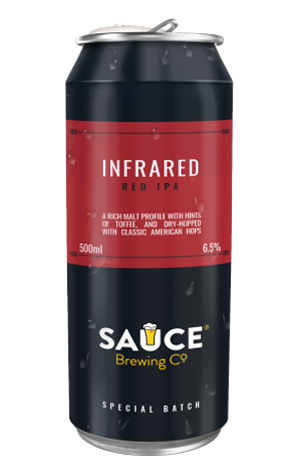 Sometimes you feel like trying an experimental beer, a new style, something that will surprise and delight you with its imaginative combination of crazy ingredients… and sometimes you want a fine version of a style you’re familiar with.

Infrared isn’t an attempt to revolutionise red IPAs. Nor is it trying to be the biggest, baddest, blow-your-face-off red IPA on the block. At six-and-a-half percent, it’s weighty, without being heavy; you can have more than one, but you could never mistake it for a session beer. The flavours are evenly distributed across the hop-malt scale: the hops bring fresh citrus to the aroma, with more resinous pine coming through in the mouth, as well as a sturdy bitterness that helps to counterbalance malt sweetness – the soft biscuity notes and the heavier toffee and caramel that come through as the beer warms up a little.

In a world of novelty beers, we don’t always get to hear the words "balanced" or "solid" or "satisfying". But they all apply here.