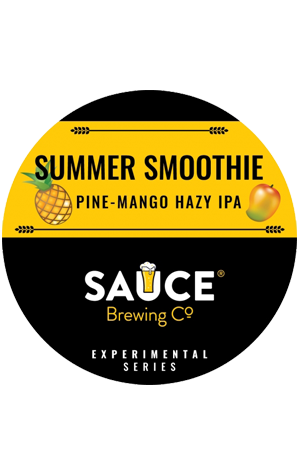 Remember when IPAs were new to you, and you thought they all tasted the same? At the tail end of summer, Sauce has released two IPAs that show just how broad the spectrum of IPAs can be.

First up is Summer Smoothie, following in the footsteps of Bubble & Squeak, Trubble & Squeak, and last year’s Breakfast Smoothie. Sauce is no stranger to the hazy IPA, and since we keep asking for them, they keep making bangers. The name says it all for this one. The mango and the lactose team up for that smooth and sweet nectar-like taste, but the sharpness from the pineapple keeps it from being sugary. It’s been dry-hopped out the wazoo, but your eyes and nose could pick that up before you’ve taken a single sip.

The second is a style less likely to be filling your Instagram feed at the moment: the Belgian IPA. Bringing together Sauce founder Mike Clarke’s loves of IPAs and Belgian beers, this is a Belgian blonde that’s been dry-hopped like a West Coast IPA. Those hop forward characters of citrus and pine are interlocked with the heavier dried fruit and spice that come from Belgian yeast. Funk and bitterness and almost a touch of sour remind you: this is a grown up’s drink.

Two IPAs, about as different as they come, but both telling the same story: Sauce knows IPAs.