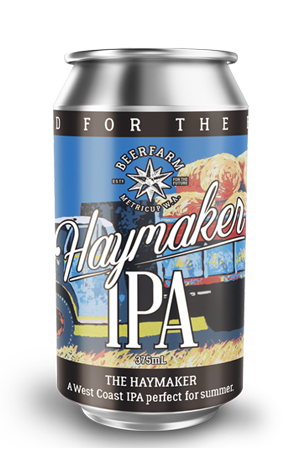 Beerfarm have established themselves as one of South West WA's most creative and curious breweries, with their strong connection to the South West due in part to their efforts to align the marketing and branding of their beers with the musings of Metricup locals.

Haymaker West Coast IPA isn't any different, with the brewers enlisting the help of local artist Caroline Juniper to create the agriculturally-themed artwork that features on the can and following a simple brief: creating a refreshing West Coast style IPA that's perfect for summer. A trio of Magnum, Comet and Fuggles lend a hefty hop presence on the nose yet combine for a very modest 35 IBU. A mostly pilsner malt bill, rounded out with some rolled oats and corn, leaves the beer light, clear and super crisp too.

The result is a beer that definitely has what it takes to quench a summer thirst with that trademark drinkability we've come to expect from the brewers at Beerfarm. That's not to say they're becoming predictable in their brewing efforts, though they are certainly establishing a reputation for brewing beers that the locals love to drink.