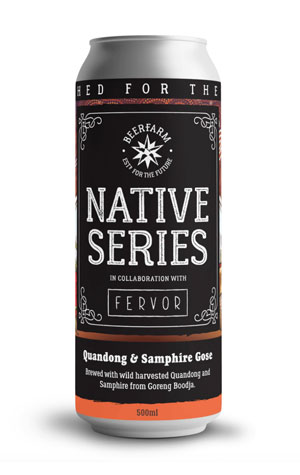 Beerfarm’s Native Series, a collaboration with Fervor that utilises ethically-sourced native Australian ingredients, returns for an eighth iteration in 2022. The captivating beer features quandong and samphire atop a clean gose base beer that is unique in flavour but entirely approachable.

When it comes to the Native Series, often the story and the concept garners as much attention as the beer itself, and rightfully so. The series is not a mere marketing ploy or an attempt at virtue signalling, but built on respect for the traditional custodians of the land and First Nations Peoples. The beer aims to educate by highlighting the sustainable use of native ingredients and storytelling, which is all laid out on a clever, "peel away" label that reveals the story of the beer, the land Beerfarm lies on, and the ingredients used in the beers.

For number eight, Beerfarm and Fervor worked in unison with Badgebup Aboriginal Corporation, who have established many land-based enterprises for Noongar people in Noongar Boodja (Central Great Southern region of Western Australia). Here, where the land is affected by salt, samphire and quandong grow aplenty and are foraged by the Badgebup rangers. These ingredients have been used by Noongar people for generations as essential foods and now have found their way into the Beerfarm brewhouse.

What you end up with here is light and refreshing with gentle fruit character reminiscent of grapefruit, peach, fresh and stewed apples, and lime. It is clean throughout, offering a touch of sweet bubblegum and earthy character on the nose. A sweet/sour balance that features a touch of salt are illustrative of the qualities of quandong (Kwondong) and samphire (Milyua) used in this beer, and overall it’s approachable and quaffable.

Beerfarm’s Native Series has always been a bit more than your typical collaboration. Where others are motivated by hype and friendship alone, this goes above and beyond in bringing awareness to the culture and foods of Australia’s First Nations Peoples, partnering with First Nations organisations and projects, and supporting First Nations communities in Western Australia. The fact the resultant beer is so good is almost just a cherry (Tchimmi-dillen) on top, while the can label is quite literally a work of art, designed by Tamara Hayden of Djikulu Dreaming.

Immerse yourself in this experiential collab by enjoying the beer while taking the time to read the label.