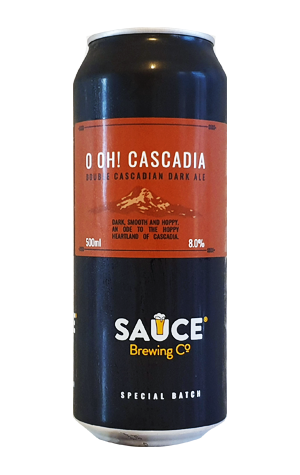 The term black IPA has always been one that defies logic. How can it be black and pale at the same time? Madness! It’s one of the reasons some people prefer the name Cascadian dark ale for what's essentially the same style of beer.*

Another reason for the name is pride in Cascadia itself, a proposed region made up of the American states of Oregon and Washington and the Canadian province of British Columbia. And what a region it would make... The majestic Cascade Mountains reaching above the clouds. These folks calling for Cascadia to be recognised as a republic. And, of course, the glorious hops and beer flavours coming from the area.

Sauce were presumably inspired by all of these things equally when they brewed a Cascadian dark ale last year and gave it a name that could serve as the Republic of Cascadia’s national anthem: O Cascadia. And this year’s amped-up iteration of the beer, O Oh! Cascadia, would surely be the national drink.

The deep brown liquid and light brown head may scream "stout", but the aroma rising from this dark beauty is hops all the way. Two of Sauce’s favourite hop varieties, Simcoe (which originated in Washington) and Idaho 7 (apparently Idaho just missed out on being part of RoC), bring resin, pine, and a touch of fruit to your nose. It’s not until you taste this beer that you can pick out, among the resiny and citrusy barrage, the roasted malts responsible for the beer’s colour. A light touch of chocolate, some roastiness rising from the depths, and a complex bitterness that brings the hops and the dark malts together.

*There’ll always be discussions about whether they’re the same, or only similar, but this isn’t the time for splitting hairs. Argue about it at the pub with mates instead.