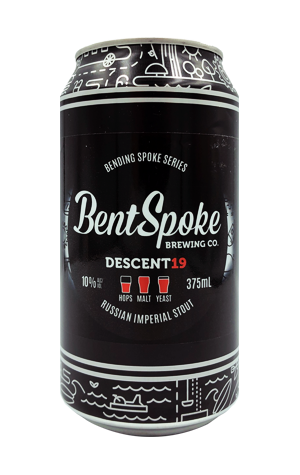 Given his history at the Wig & Pen, there would have been an expectation when BentSpoke opened in Canberra that Richard Watkins would be set free to unleash an array of the experimental and the unlikely upon drinkers. Yet, while visitors to the brewery's Braddon HQ have been able to try a multitude of styles on tap, when it's come to the beers sent further afield they've tended to be of the contemporary and hop forward variety, from Barley Griffin to Crankshaft, Sprocket, Red Nut and Cluster 8.

Now, however, with that side of the operation sailing smoothly, we can look forward to more treats from the creative depths of his brewing mind under the Bending Spokes banner. This series has been launched with a bang in the shape of Descent 19, this year's birthday Russian imperial stout (from the man who brewed Australia's first such beer, fact fans).

The beer spent nine months in American oak bourbon barrels before being blended back with a younger batch in May and, well, let's just say it's a bloody ripper. Working through a glass took me back to the joy of encountering some of Murray's early barrel-aged imperial stouts: a sensorial rediscovery of something remarkable. Within the blacker-than-black, viscous liquid you'll find dark fruits, oak, leather, liqueur chocolate, cigars, muscat and more; a beer that just goes on and on and on.