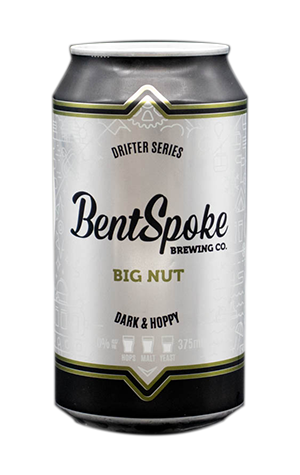 The latest beer to make its way into cans as part of BentSpoke’s limited release Drifter series is another popular pour from the Braddon brewpub: Big Nut. The name itself stems from one of the taps at the brewpub, all of which are the work of Peter Rogers. Peter and BentSpoke head brewer Richard Watkins have known each other for years and have their working relationship locked down. Sometimes Richard comes up with a beer and Peter goes away and designs a handle, other times Richard creates a handle and Richard choses a beer. Big Nut was a tap handle that became a beer.

Like many of BentSpoke’s most popular releases, it's a hop forward beer but, being a black IPA, malt is just as much the focus. Thus, alongside the herbal, piney, resinous and lightly citrusy hop characters, look out for some big roasty notes and some coffee too.