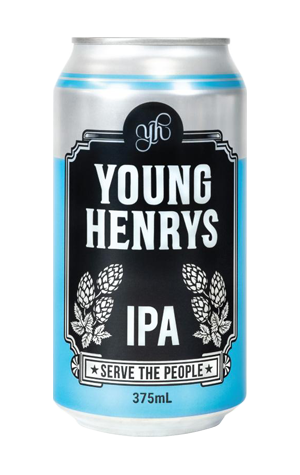 Young Henrys’ slogan is “Serve The People”, and it appears the people have been calling to be served with an IPA that’s available all year round. The YH team has been been teasing for quite some time with bigger, hoppier beers as limited releases: Summer Hop Ales, Winter Hop Ales, Brut IPAs, rye IPAs, double pale ales… all supporting the core lineup, but never hanging around. Finally, as of September 2019, there’s an IPA that’s here to stay.

It’s a variation on an IPA made by the original YH brew team, but the recipe’s been tweaked and revised over time, and is now in the core range with “a new hop regime and brand spankin’ new look”. Nine varieties of Aussie and American hops bring a complex blend of aromas and flavours, with tropical, zesty citrus, and pine all in there. But, while it brings more flavour and more punch than the brewery's other core offerings, it still sits comfortably with Young Henrys’ approach to beers - refreshingly sessionable. The bitterness is there, but eases you in; the finish is tasty, but dry; and the alcohol is present, but hidden.

As such, you've got something you’d happily order by the jug, or take to a BBQ and share with someone who’s still discovering bigger hoppy beers.