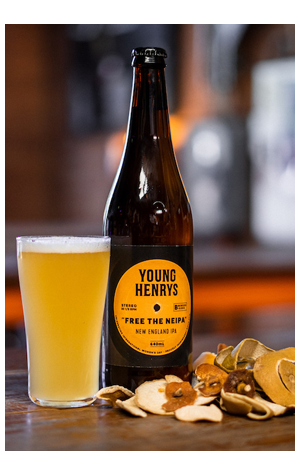 Forget celebrating International Women’s Day with a cup of Earl Grey tea - celebrate it with a glass of Earl Grey beer.

Free the NEIPA, a New England IPA infused with bergamot, is the latest Young Henrys’ “Brewers B-Sides” release. It was made was made by the women of Young Henrys - in fact, it was led only by women all the way through the process, from recipe development to brewing to naming to marketing and sales. Brewer Michelle Hanrahan and head distiller Carla Daunton were at the helm of the beer’s creation, and they brought in their female colleagues for brew day.

Like the rest of us, Michelle and Carla didn’t know anything about bergamot other than the fact that it was used in Earl Grey tea. So they got their hands on a bunch of the small citrus fruits, and extracted the character from the dried rind through infusion and distilling, to make a kind of essence. (“Aaaand now I’ve got 130 litre of it” Carla says.) From there, they made a juicy and sessionable IPA - a style much loved by the women leading the brewer - and got to work on the balancing of flavours.

The blend of hops presents a palette of fruity flavours that invites the bergamot to join without having to struggle to compete for attention, to make itself known without dominating. Wheat and oats make this beer soft in the mouth, which works well with the juiciness and citrus sweetness the bergamot brings. Both the citric character and bitterness from the rind build as you drink, balancing with the gentle hop flavours and low bitterness of the style like finding that sweet spot on a seesaw.

Young Henrys will donate a portion of the beer’s profits to Newtown-based women’s charity, Two Good Co. And you can watch a video of the brewday here. And who doesn’t love a good montage?