Beer Young Henrys Wattle They Think Of Next? 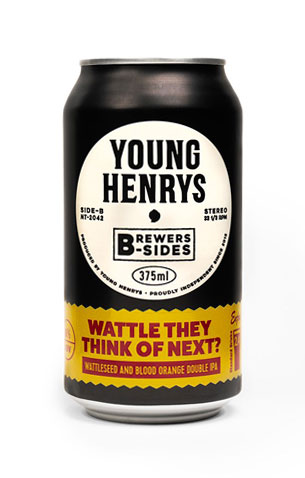 The latest Brewers B-Sides limited release from Young Henrys has big shoes to fill, with their previous, a mandarin and watermelon sour, a certified banger. This new fruity number employs blood oranges and toasted wattleseed in a double IPA with the puntastic name of Wattle They Think Of Next?

Pouring an amber colour that wouldn’t look out of place on a necklace, this DIPA has a bold, almost foreboding aroma, in which the 8 percent ABV and trio of NZ hops (Waimea, Rakau and Wakatu) seem to do the talking.

Much like a dog whose bark is worse than its bite, these scary aromas fade away after a delightful honey-sweet sip. I had to double check this was actually a double IPA because it is so light and deliciously so – the sort of thing you could sink a few of in an afternoon with a breathtaking view of an appropriately Australian body of water [Presumably, keeping a safe distance from said body of water! – Editor]. However, with 2.4 standard drinks on the cards per can, this is one you’ll want to stop and sip – which is just as well as the wattleseed and blood orange team up to be greater than the sum of their parts and give you so much complexity to explore.

(I’ve never said this before, but if you made this into a shandy you would have an absolute arvo-is-sorted beverage on your hands. And I'll never say it again – take a screenshot.)