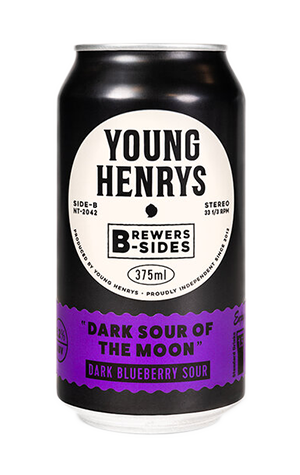 If, like me, you look at this can and think it looks sexy and new but also somewhat familiar, there’s a reason for that. Young Henrys brewers have been exploring alternative styles in their Brewers B-Sides series for a while but, until now, the B-Sides have been packaged in longneck bottles. Now the series has moved into tinnies, Dark Sour Of The Moon is the first to show off the new packaging.

The experience of drinking this beer isn’t all that different from listening to the song that inspired its name - a little off-centre and parallel to reality. It’s one thing to know in theory what the beer is – an Oud Bruin with blueberries – and another to taste it for yourself. It turns out that when you mix an old Belgian style with tart Aussie fruit you get something that tastes like both and tastes like neither.

The colour? Deep mahogany, with an out-of-body shadow of purple – if you imagine it just right. The smell? Black forest chocolate, and prune juice, and crispy honeycomb. The taste? Sour and citric, with sparkly carbonation and an undercurrent of malt sweetness leading you into blueberry tones.

Even if the sky is falling down, it’ll be waiting for you – the Dark Sour Of The Moon.