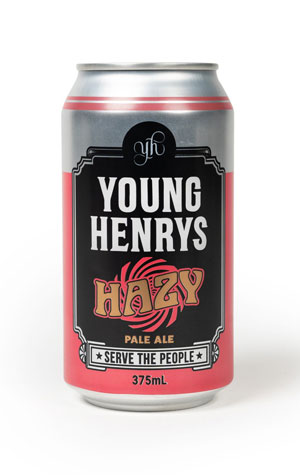 Hazies are kind of like the Ned Kelly of Australian beers. There are those of us who hold them in high regard, as a beacon of rugged truth and rebellion. Others see them as less than drivel, unlawful abominations only capable of inspiring idiots. Either way, whether it is love or hate, people hold strong and emotional opinions on hazy beers.

What I’m trying to say is Young Henrys have released a hazy pale ale, not as a limited release but directly into their core range.

Pouring a suitably hazy pale shade of mandarin, a sniff test doesn’t give too much away beyond a bit of orange and pineapple. Taste wise, there is a sweet, stonefruity punch that's curbed by some mild pine flavours that settle in by the side of my tongue and behind my teeth [That's very specific, Benny. Can we look forward to anatomically-focused tasting notes in the future? – Editor]. It seems to play around like a miniature version of that cult from Midsommar running around a teeny, frothy maypole in your mouth. Perhaps the most curious thing about Hazy is how the sweet and savoury notes seem to be chasing the tails of the other, creating a balance that is so fine you basically don’t realise how much you’ve sipped. This makes it seriously smashable (which was definitely the intention) while somehow hiding and highlighting the 5.2 percent ABV.

Hate or love. Sweet or savoury. Hazy or not. Young Henrys have created a sippable contradiction they hope will stand out from the crowd. Considering what this beer has taught me, I wouldn’t be surprised if it both did and didn’t.