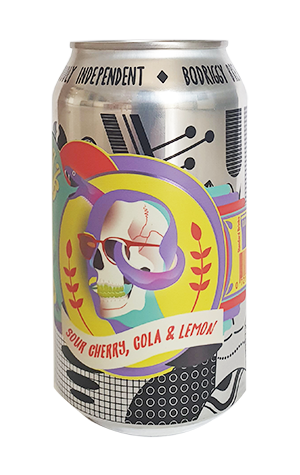 Now that Bodriggy have opened their doors to the public, they’ve got a lot of taps to keep full for the hordes of people keen to enjoy the brewery's Abbotsford home. One unfortunate consequence of opening a bustling brewpub that struck fear into the heart of this writer is that it might spell an end to one of my favourite series, Space Milk. The lactose-laced sours have previously welcomed the likes of almond, cayenne pepper, marigold and coffee skins into their lives in a way that works surprisingly harmoniously given the ingredients.

Thankfully the series is back, with Volume 5 the first since Bodriggy launched their incredible venue and laden with sour cherry, homemade cola (which comprises lavender, coriander seed, star anise, vanilla pods and cinnamon sticks) and lemons. The beer isn’t quite as fluffy as some of the others and instead serves up an earthbound tart cherry, with underlying herbal notes from the homemade cola with a liquorice like flavour, star anise and coriander seeds the clearest. The zesty citrus also lends the beer a lemon, lime and bitters character that cuts through on the finish. Welcome back, Space Milk.