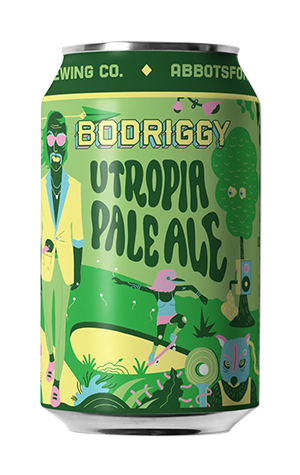 For Thomas More, Utopia was a land without lawyers, private ownership and where any religious person could live free and well. Unfortunately for Thomas More, he didn’t live in his imagined state and, less than two decades after publishing his political manifest, Henry VIII came for his head when More the Catholic wouldn’t get on board with the Protestant Reformation.

For Bodriggy, Utopia looks a little more like a world plastered in tropical hops and good times. It’s a sensation the brewery have looked to capture in a can with Utropia Pale Ale: a hazy pale with sessionability at its heart.

Utropia pours pale golden and, while Mosaic, Calypso and Azacca combine for a mix of lychee, guava and mango, it possesses a dry finish that balances out the beer's otherwise juicy mouthfeel.