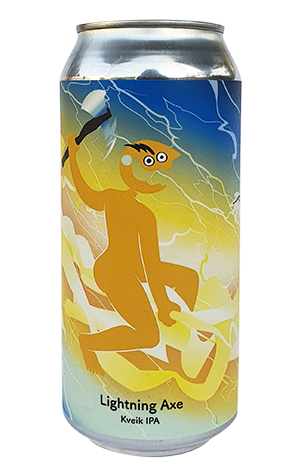 It was almost exactly two years ago when I first heard an Australian brewery owner talk about a "new" Norwegian yeast that brewers had started using in America and Australia and which was, in fact, very old. Called kveik (it remains to this day a word I manage to say differently on each pronunciation), the yeast was known for its incredibly fast ferments and Steven Germain and the rest of the Tallboy & Moose team had been eager to play around with it.

They did so with what they dubbed a Norwegian pale called Lightning Axe. First time around, they produced just a few kegs but now the brewery is regularly sending cans from their Preston home, the beer has returned with a few recipe tweaks, a little more booze and an additional "I".

Now tagged a hazy IPA, it's one in which where Ekuanot and Azacca hops add tropical fruit and spice that’s complemented by further tropical flavours from the yeast. It can make it a little hard to know where the hop character ends and the yeast begins, but what you can say is that it's an incredibly smooth – almost smoothie-like even – beer with big notes of mango, orange, peach and pineapple, a light spice and a big, bitter finish.