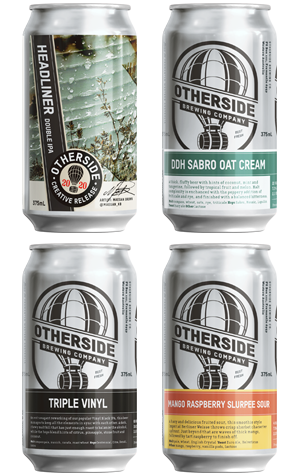 Released with ten days of each other, this quartet showcases not only the scope of Otherside’s brew schedule but also acts as a snapshot of 2020’s pointy end beer zeitgeist. They’d also work quite well at some sort of beer degustation, if that was possible.

Kicking off with the latest Creative Series release, Headliner 2020 may be a shock for some who anticipate something akin to the punchy double IPA from last year, as this is best described as juicy – not hazy, although there is an opaqueness, not NEIPA, nor a DDH variant. No, it's juicy, which here refers to mouthfeel and lower (50) IBUs, and plays out as citrus and tropical notes, mango in particular, to sit very much where the '20s, at this early stage at least, are heading.

Sticking with hops and, in particular, new varieties that can prompt the arrival of new beer styles in order to showcase them at their best. In a series of beery oat-triticale-lactose Old Testament-like "begats", the oat cream IPA seems to have become a vehicle for hype hops. However, as hype shifts to critical consideration, Sabro has become quite a polarising variety, which makes sense if you’ve grown up enjoying beers with delicate noble hops or America's classic, punchy four Cs. Why would anyone want ripe mango, limey mojito, coconut and mint in a beer, you may ask? But here we are, and DDH Sabro Oat Cream IPA delivers all of this in a round, lactose-enhanced body that runs with a minty greenness throughout, plus a touch of chalk.

So, with all this progression on one hand, why not look back too – to circa 2013 and one of the hype styles of that era: the black IPA? And, in Otherside’s case, do it with Triple Vinyl, a triple black IPA. At 10.2 percent ABV, this is a big beer, and it feels like it. While Sabro makes an appearance, it’s alongside a rhythm section featuring Centennial, Citra and Denali rather than as the lead singer. Classic roast, mocha and chocolate malt tones feature, but black IPAs in 2020 seem to have greater hop finesse and smoothness, not just sticky resin and jarring bitterness. There’s weight and mid-palate creaminess too, tied together by a round, warming booze.

And for dessert ... why not a Mango Raspberry Slurpee Sour? Bombing an imperial Berliner Weisse with mango, raspberry and lactose may not have been the direction that Germans imagined this sour beer style would take, but neither was an imperial version. Unsurprisingly, mango plays out with raspberry tartness and creamy vanilla, all of which dances between sweet and bright sour.