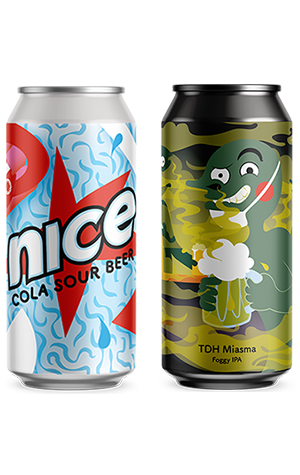 Tallboy and Moose may be busy back welcoming people inside their Preston brewpub - or outside, in the case of their driveway-based beer garden - but they’ve also kept cans flying out into the world too. The brewery’s two November releases are returning recipes, though both have undergone a few changes and are spreading their wings far wider than the previous keg-only releases.

The sour Nice Cola is a re-worked and canned re-issue of the brewery’s LA Cola kegs from a little while back. It’s a beer created with a blend of secret ingredients and while it does look quite similar to the world’s most famous brand of cola, the taste isn’t a direct replica. Instead, it’s more like what you might find in an inner-city cafe, more herbal and a little more licorice-like than Coke while holding a similar level of sweetness. But that sweetness is joined by a vert tart edge which brings the beer closer to cola lollies territory.

Then there's TDH Miasma which was first released in 2018, with the main changes in the new iteration of the “Foggy IPA” being the brewery’s liberal use of the newer hop products in Lupomax Citra and Cryo Amarillo, along with Galaxy. Cryo hops have been around a couple of years now but Lupomax are a little newer and come from the American hop group John I. Haas, which is part of the global BarthHaas Group that Hop Products Australia stems from. Lupomax so far only features a few different hop varieties with Haas saying they contain less vegetative matter than traditional pallets and a very clean and intense hop flavour. In the case of Miasma, it all makes for a Triple Dry Hopped beer that’s impenetrably cloudy and awash with some very ripe tropical fruit flavours, as though mango flesh has been squeezed directly into the tin before orange and pineapple were immediately blended in too.