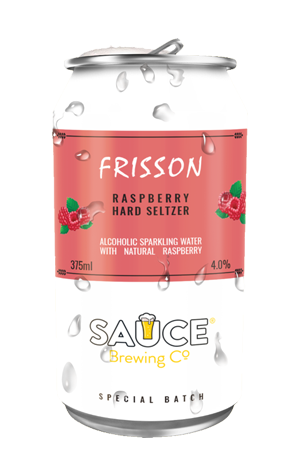 If you’re finding yourself in search of fizzy refreshment that isn’t beer this summer, take note – Sauce have entered the hard seltzer game with their Frisson range.

Sauce brews their seltzer through the same brewhouse as their beer, puts it on tap next to their beer, and puts it in cans just like their beer. But, unlike their beers that push for maximum flavour, their Frisson is all about light natural fruit flavours, high carbonation, and low sugar and carb. Since Sauce’s Frisson range is brewed, their seltzers have a little more body than some others on the market, and the fruit flavours carry well.

While many other seltzers go for a zero colour soda water look, Sauce’s Frisson range – which rotates through different flavours – takes on the colour of the fruit they put into each batch. The first batch, Frisson Raspberry, has a faint pink hue like old fashioned lemon lime & bitters, or like a pink diamond. The second, Frisson Orange & Passionfruit, is… well, orange. That’s to be expected.

As Sauce summarises it: “Is it beer? Yes. Also no. Is it refreshing and yummy? Absolutely yes.” Is that clear?

Note: there may be other hard seltzers released by Sauce, but we won't be writing about them. We're happy to let readers know which breweries are playing in this space, but we're a beer website and need to focus our attention on the diverse array of beers being released.