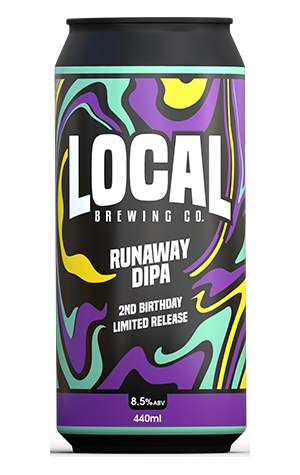 February 2021 is the two-year mark since the team behind Local Brewing Co launched and plenty has changed in that time. For one, they used to be called A Local Beer and only had a single beer too but in 2020 their name change saw the team expand the core range to become Sunset XPA, Pacific Paradise and Runaway IPA. To celebrate turning two, the brewing company has doubled down on the last of those to brew a double version of Runaway.

The DIPA contains the same hop combination of Simcoe, Ekuanot, Citra and Centennial as regular Runaway and the booze level is has been turned up from 6.2 percent ABV to 8.5. That boost in alcohol provides quite a boozey sweetness that battle's against the DIPA's sweeter edge that provides a base for punchy pine, pawpaw and melon to leap from.