Beer Local Brewing 97 Draught & This Is Your Captain Speaking 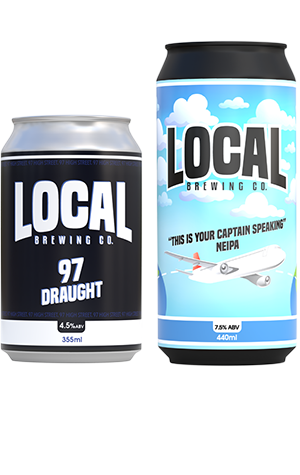 They might share a similar hue but the two latest limited releases from Local Brewing Co probably couldn’t be further removed from one another. For 97 Draught, the kolsh was brewed as a collaboration with Westgarth Liquor, which occupies number 97 High Street, Northcote. Effectively, it’s the kind of beer you might hand to someone who mostly drinks mainstream lagers and though it has similar hallmarks to such a beer, it still packs a punch of flavour. Mostly that's of the floral variety thanks to the inclusion of Saaz and Hallertau hops, while there's also a substantial bitterness packing a bite too and crisp, lean and bready notes providing a touch of sweetness.

Then there’s “This Is Your Captain Speaking” A NEIPA brewed for GABS and containing mandarin and maple syrup and brewed with the idea that since plane travel is a real rarity at the moment, at least your tastebuds get to travel. While maple syrup is the flavour you could easily assume would dominate, it’s actually the mandarin that takes centre stage, while the maple provides an underlying sweetness and the beer having classic hallmarks of a standard hazy with tropical fruit, citrus and a bit of pine coming from the hops.