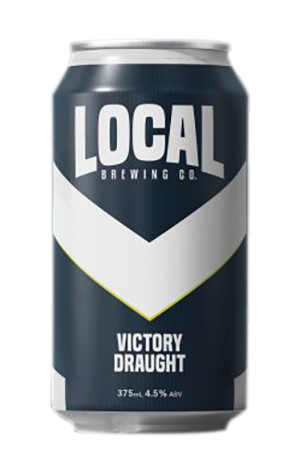 A few weeks out from the 22/23 A-Leagues men’s season, Local Brewing Co announced they’d been named the official beer partner of Melbourne Victory. It’s an impressive feat for the indie Melbourne brewing company and as well as making them an associate partner, it will see their forthcoming taphouse act as one of the club’s away-game venues throughout the season.

They've also marked that partnership with a beer to call their own, which brings us to Victory Draught. If you're an avid A-League fan, it's certainly the kind of beer you might like in your hand as you sit on the edge of your seat, with the pale, yellow lager not too dissimilar from the kind of beers that have been enjoyed at stadiums for generations. Having said that, if you can look away from the game, there are layers of floral hop notes, a bready sweetness and building bitterness to pick apart as the game unfolds.