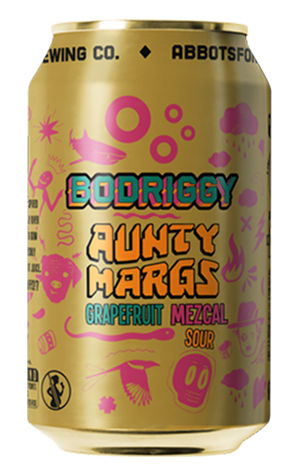 It may be a brewery first and foremost but Bodriggy’s Abbotsford home also boasts an impressive bounty of backbar mezcal. To transport some of the spirit's flavours into beer form, the brewery have released the cocktail-inspired grapefruit and mezcal sour, Aunty Margs. In order to replicate the quintessential smoked note found in mezcal - one caused by the agave plant being roasted before being distilled - the brewery added Red Gum Smoked Malt from the small-batch maltsters at Voyager. It might make up only two percent of the total malt bill of the beer but it imparts an impressive amount of flavour, at first bringing to mind a classic German rauchbier with its bacon-like properties but being far lighter and more savoury than you'd find in Bamberg.

To shift Aunty Margs from being a spirit and closer to margarita territory, the brewery also added salt from the Murray River Salt Company and grapefruit juice form Market juice. The salinity is a little lighter than the grapefruit notes but almost like the reverse of drinking an actual cocktail, appear to the foreground as the drink goes down.