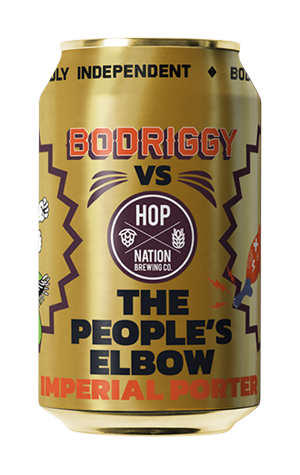 Among the many collaborative events running during Good Beer Week 2021 was Hop Nation and Bodriggy's battle, North X West Fight Club. Given it was one that involved brewery employees being dunked in tanks of water, you could assume it wasn’t the friendliest of collaborations, but we’ve been told everyone remains as good mates as ever.

Launching at that event was The People’s Elbow, an imperial porter featuring each brewery transformed into mascots ready to do battle. The beer inside is 9.5 percent ABV and, while that strength is noticeable, the sweetness that coats the palate takes that away quite quickly. There’s a strong whiff of banana on the nose too, along with molasses, coffee raisin and a decently bitter kick.