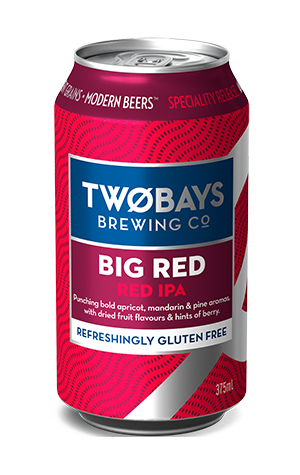 TWØBAYS have unveiled their latest seasonal and it’s one that’s quite perfectly suited to the season too. For one, Big Red is a red IPA, which makes it the kind of beer you want when the days start to warm up, even if the mornings and nights are still quite brutally cold. But secondly, these words are being written on IPA Day, with the beer's release timed so that anyone who can't enjoy gluten can still enjoy a crafty IPA on the first Thursday in August.

Visitors to the Mornington Peninsula brewery's taproom may have already trialled a precursor to the Big Red tins, which has been given its impressive ruby colour thanks to the millet malt Red Wing Amber, produced by the American gluten-free maltsters at Grouse Malting and Roasting.

Not only does that millet give the beer a vibrant red hue but it also provides plenty in the way of rich flavours, with toffee, raisins and other dried dark fruits coming together like a tasty mid-morning treat. That’s not to say it’s truly sweet, though, with a dryness running through the beer and Big Red also a showcase of Equinox and Cashmere hops. As well as adding a substantial bitterness, those American hops pack a punch of pine, grapefruit and lychee to take the beer away from mid-morning snack that isn’t too healthy to reaching for a full fruit bowl instead. After all, if you're going to celebrate IPA Day, isn't it best to put down the baked goods and enjoy a bit of fruit instead?