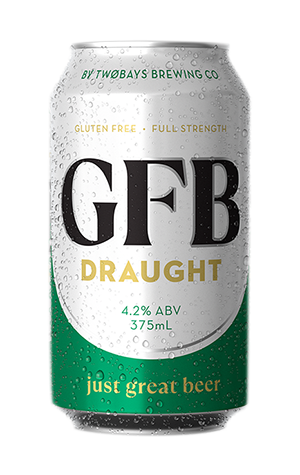 Whether it’s beer made with lentils or a heavily-hopped IPA, the gluten-free brewers at TWØBAYS aren’t afraid to brew across styles. But it's this beer, GFB Draught, that seems to have caused the biggest stir when added to the brewery’s core range in September 2021. It's part of a new range of more easy-drinking gluten-free beers (or GFB for those wondering where the name comes from) and is a first for the craft brewery.

Typically, TWØBAYS beers can be considered crafty in style and come in four-packs, whereas GFB comes in six-packs (or slabs of 24) and is designed for easy drinking. In short, it’s a fridge-filler or barbecue-cracker of the gluten-free variety and, if there’s any wondering if there's such a demand for such a thing, well that gets us to the big stir when it launched: the first batch sold out in less than 24 hours.

So what’s inside the classic can that’s had people clambering to get their hands on one? Pouring a perfectly clear golden straw, it’s a beer that's light on the hop aromatics but still packs a bit of a bitter punch; pair that with a soft, grainy sweetness and a crisp finish and you have a GF beer that, like that first batch, could easily disappear quickly.