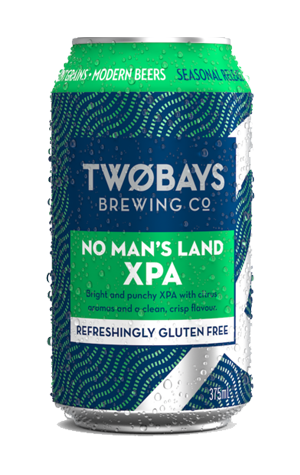 It's fair to say TWØBAYS head brewer AG likes his hops. Certainly, he's been adding them in greater volumes to many of the Dromana brewery's beers than any other locally brewed gluten free beers we've tasted and that's the case here with the No Man's Land XPA.

While the can talks of its citrusy character, aroma wise it's a deeper, danker form of citrus than their juicily orangey pale but no less hoppy. There's a touch of edgy tropical hops there too, particularly to taste, while it's got a touch of sherbet on the malt front and finished with a broad, fruity and slightly resinous bitterness. If the name is a reference to the no man's land between their Pale and IPA, it occupies that spot very hoppily.